Anyway on our first dinner, we had buffet at a restaurant called Rico Rico at Hotel Universal Port (just across Universal Studios).  Imagine eat-all-you-can Japanese food!  But most of us focused on one specific food that night -  Kobe beef!  Haha....

Anyway, I wasn't able to take any food photos that night except for a birthday cake served to 2 of our tour group mates who were celebrating their birthday. 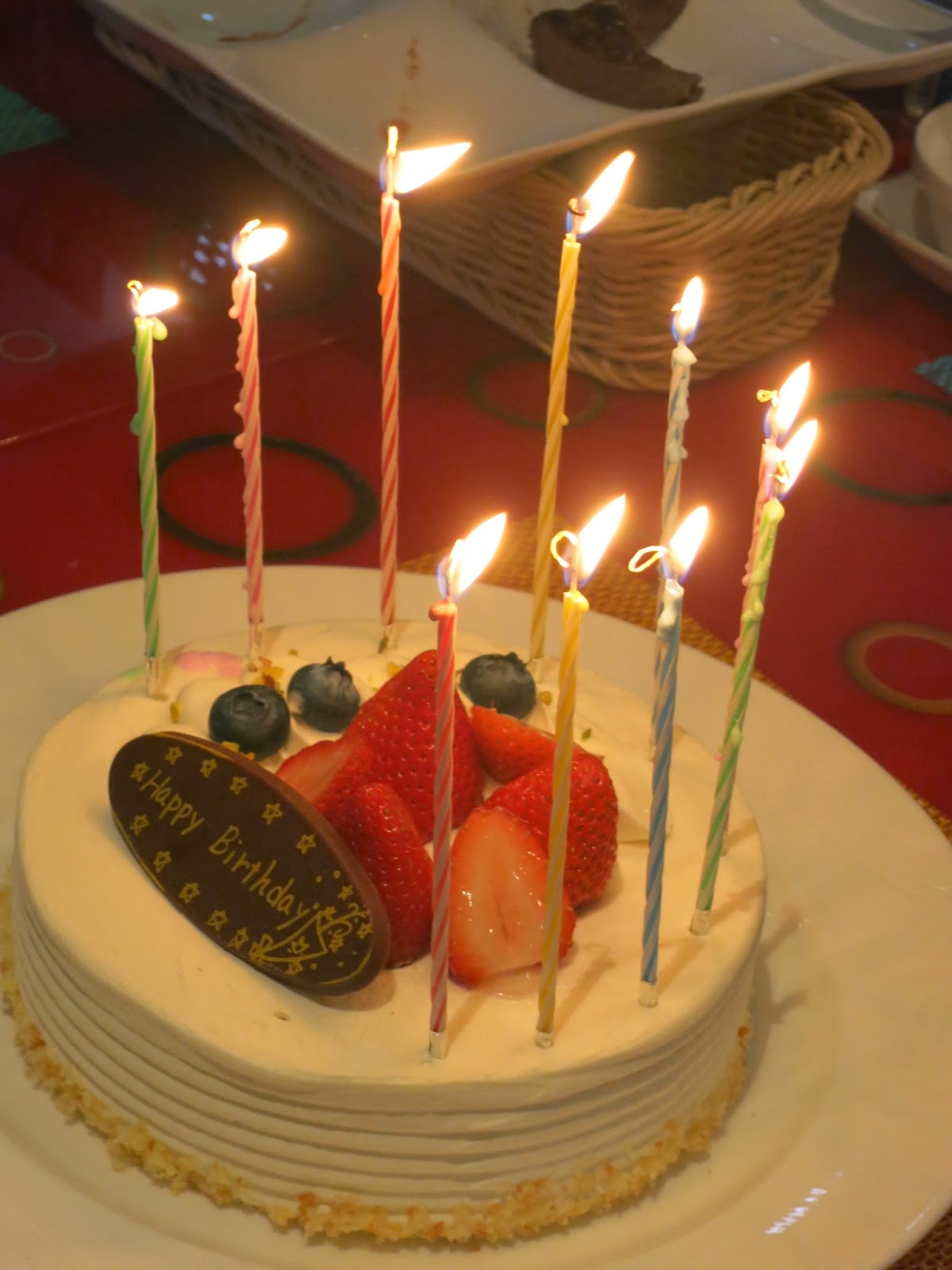 In the succeeding days, we tried more Japanese food -


I was also able to eat a lot of sushi, miso soup and my favorite Takoyaki balls.  Guess when I had the chance to eat Takoyaki balls?  Every breakfast at the hotel buffet!  I didn't know they could be breakfast food because I always ate them as snack food.  Haha...  (BTW, did you know what Takoyaki balls are made of? Minced octopus, tempura scraps, pickled ginger and green onion.)

There was also one night when we had a Kimono dinner. Yep, we donned Japanese kimonos and slippers (btw, when you wear a kimono, always remember that the left side is always over the right side.  Doing it the other way around is for funerals).

We did the Kimono dinner when we spent overnight in a city called Atami.  Our tour guide said it's the summer destination of the Japanese.  So think of rows of hotels by the cliff and overlooking the sea.  The place reminded me of Sorrento and Capri.    But I wasn't able to take photos because we arrived late in the afternoon, then left early the next morning.

So this was the traditional Japanese meal that was served during our Kimono dinner.  In addition to this, there was a mini shabu-shabu, rice and ice cream.  So little right?  So I got hungry that night. Haha... 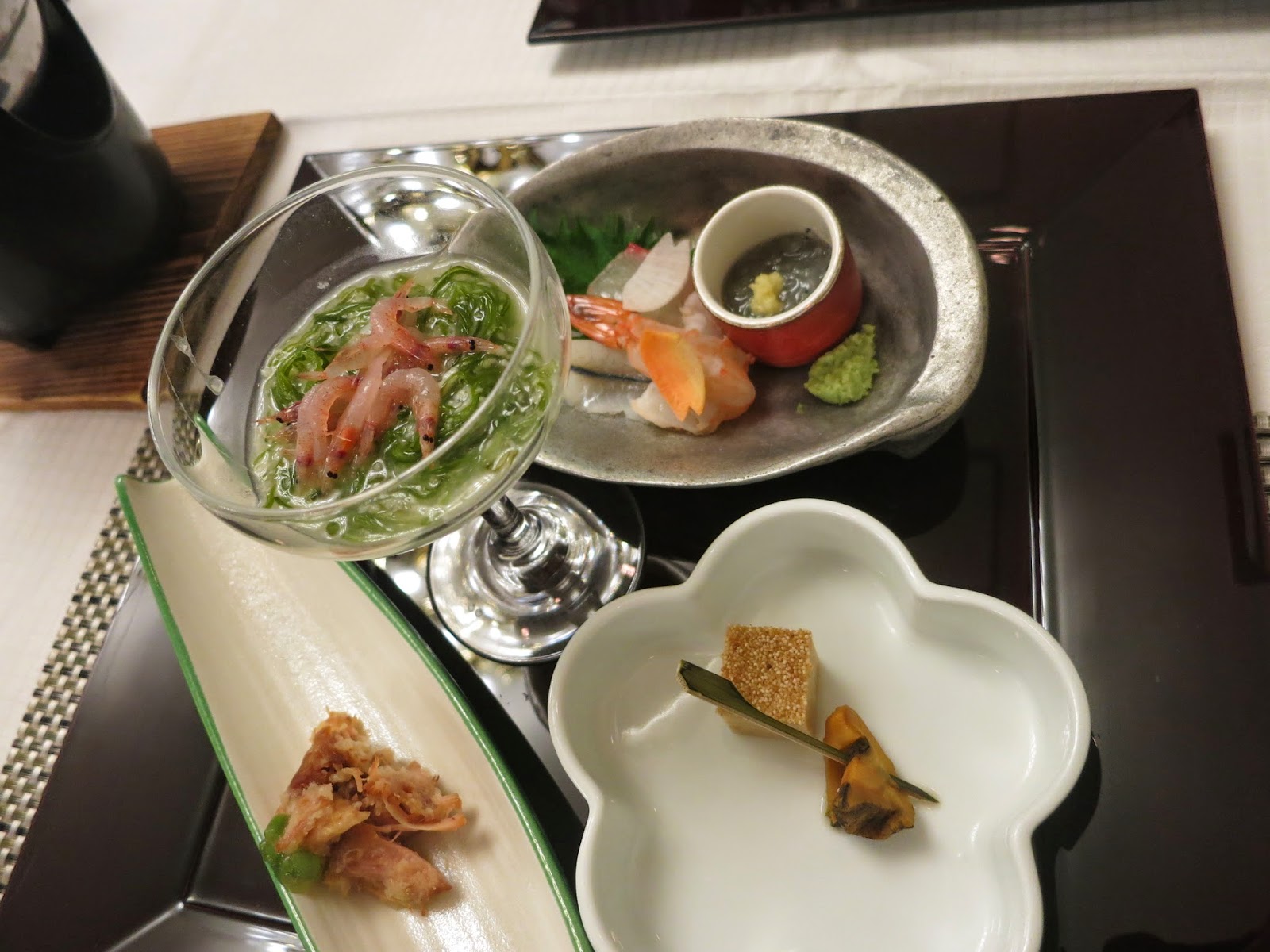 Among all the meals that we had in Japan, the most that I enjoyed was our food trip during our free day in Tokyo because we went to local restaurants that weren't for tourists.  A cousin of one my tour mates who's an English professor in Japan brought us to the usual restaurants they go to. 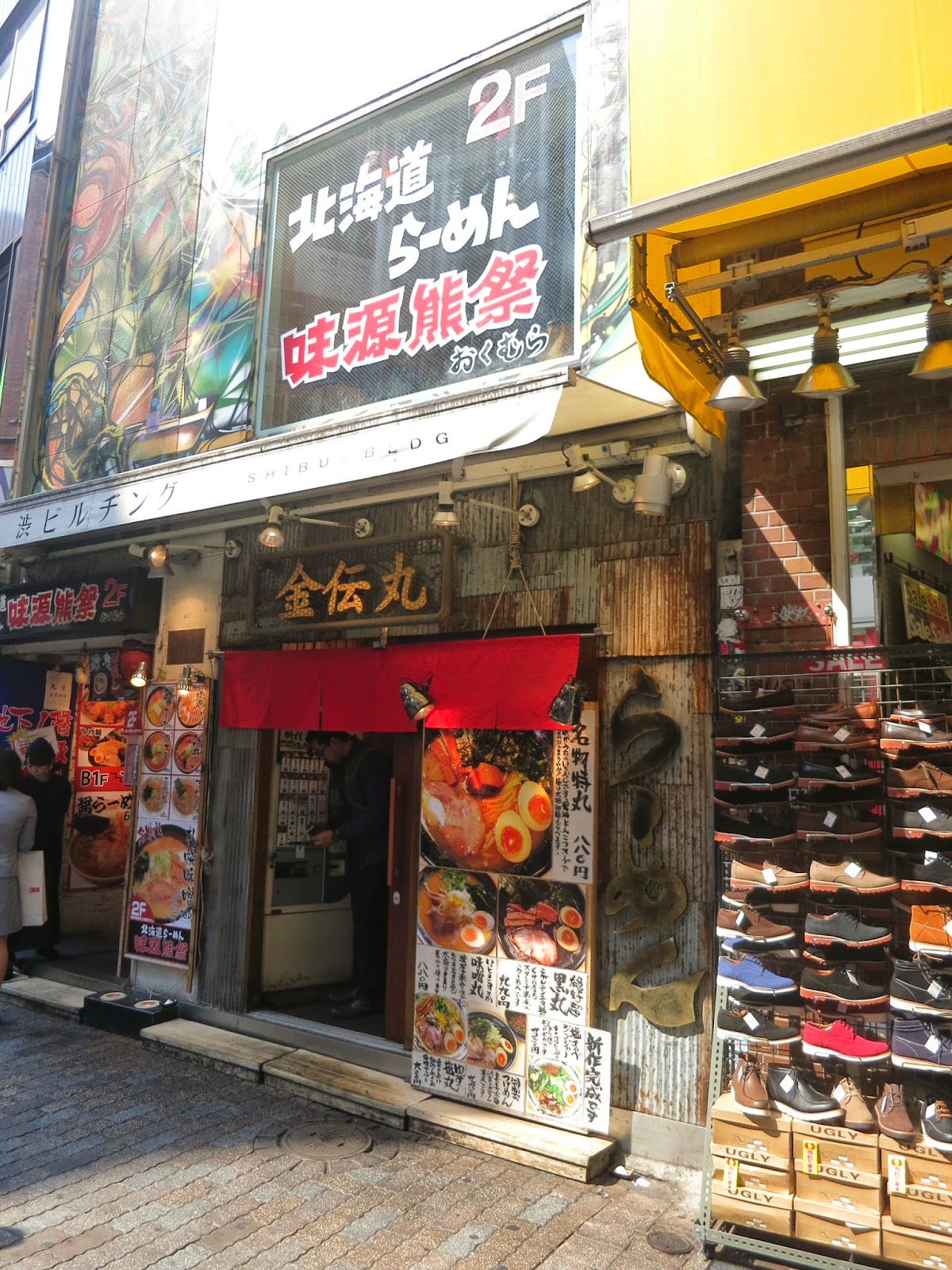 To order ramen, you have to select your order and pay in a vendo machine at the entrance. We had to make the English professor do it for us because we couldn't understand anything. Haha... 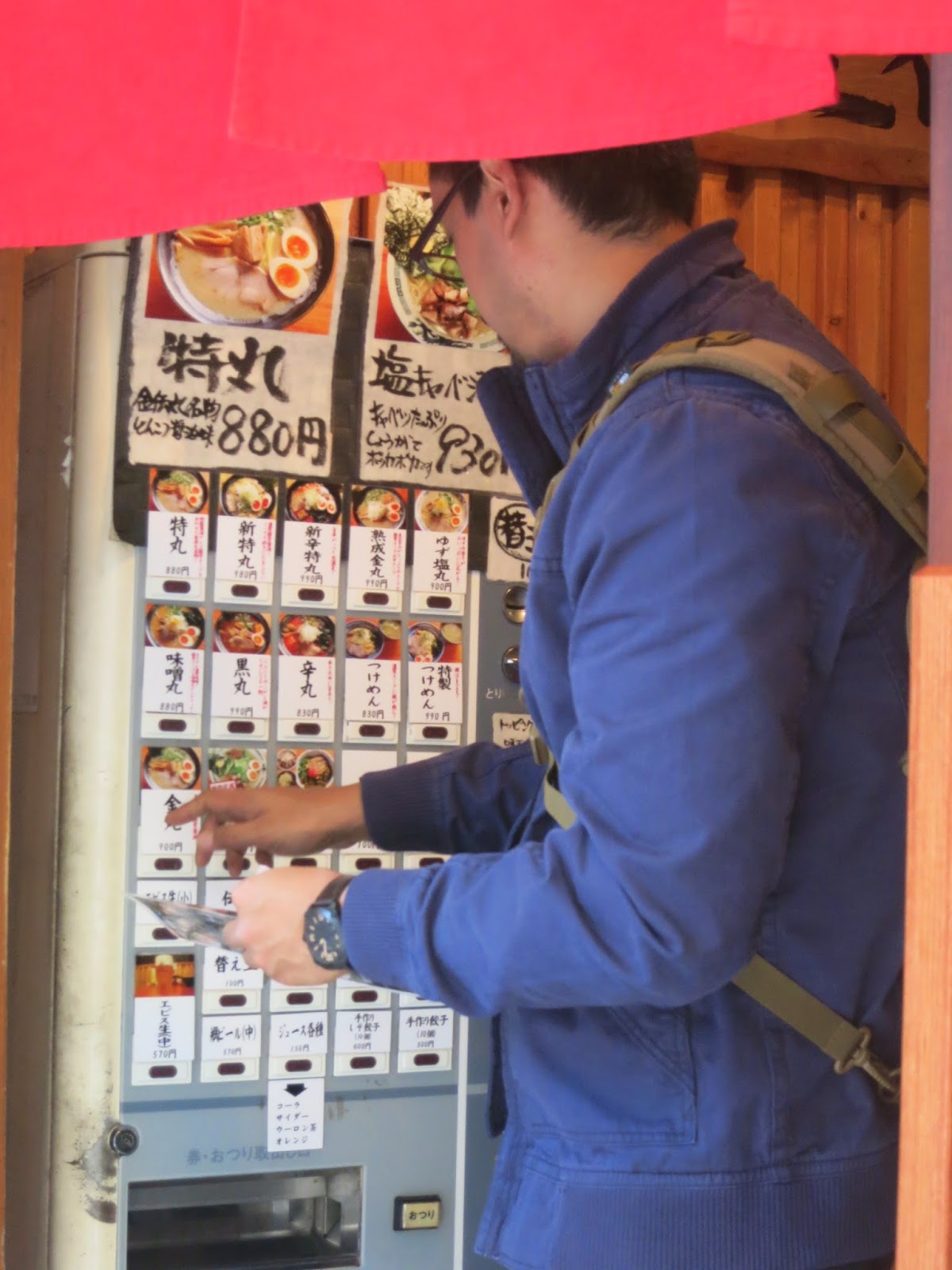 A bowl of ramen costs 880 yen or about Php385.  I had the pork bone soup (forgot the Japanese translation) and some gyoza.  Super yummy! :) 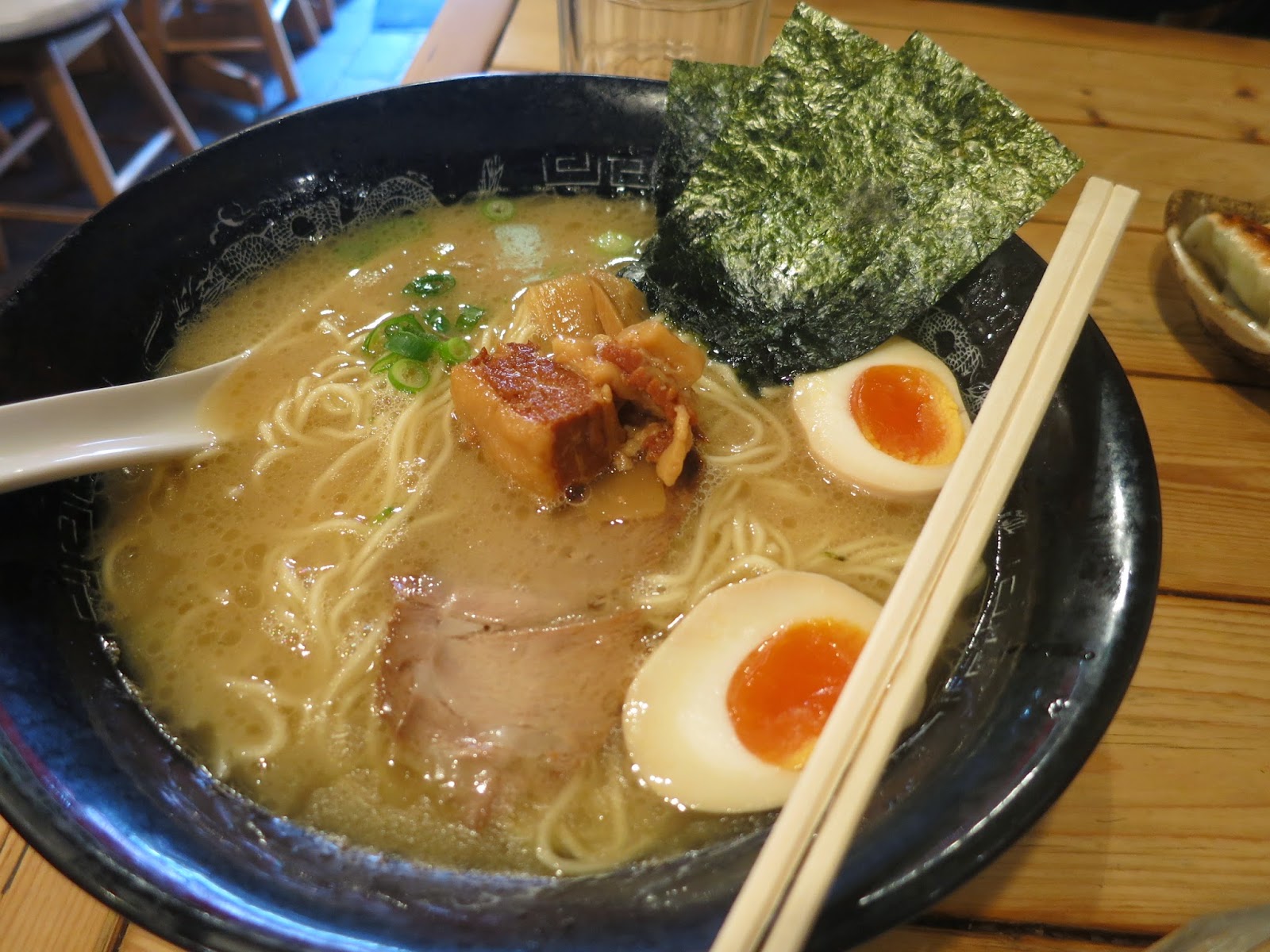 Then for dinner, we went to a shabu-shabu place called Onyosai (when translated in English, it means hot vegetables).  It was buffet at about 3,200 yen per pax or about Php1,400.


The shabu-shabu experience we had at Onyosai was different from any other shabu-shabu I ever had.  For example, for the broth we had a choice of 2 from the menu (they had about 6 kinds of broth if I remember right).   Ok, now I couldn't even recall what broth we chose. Haha...

The broth was contained in this YinYang-shaped pot. 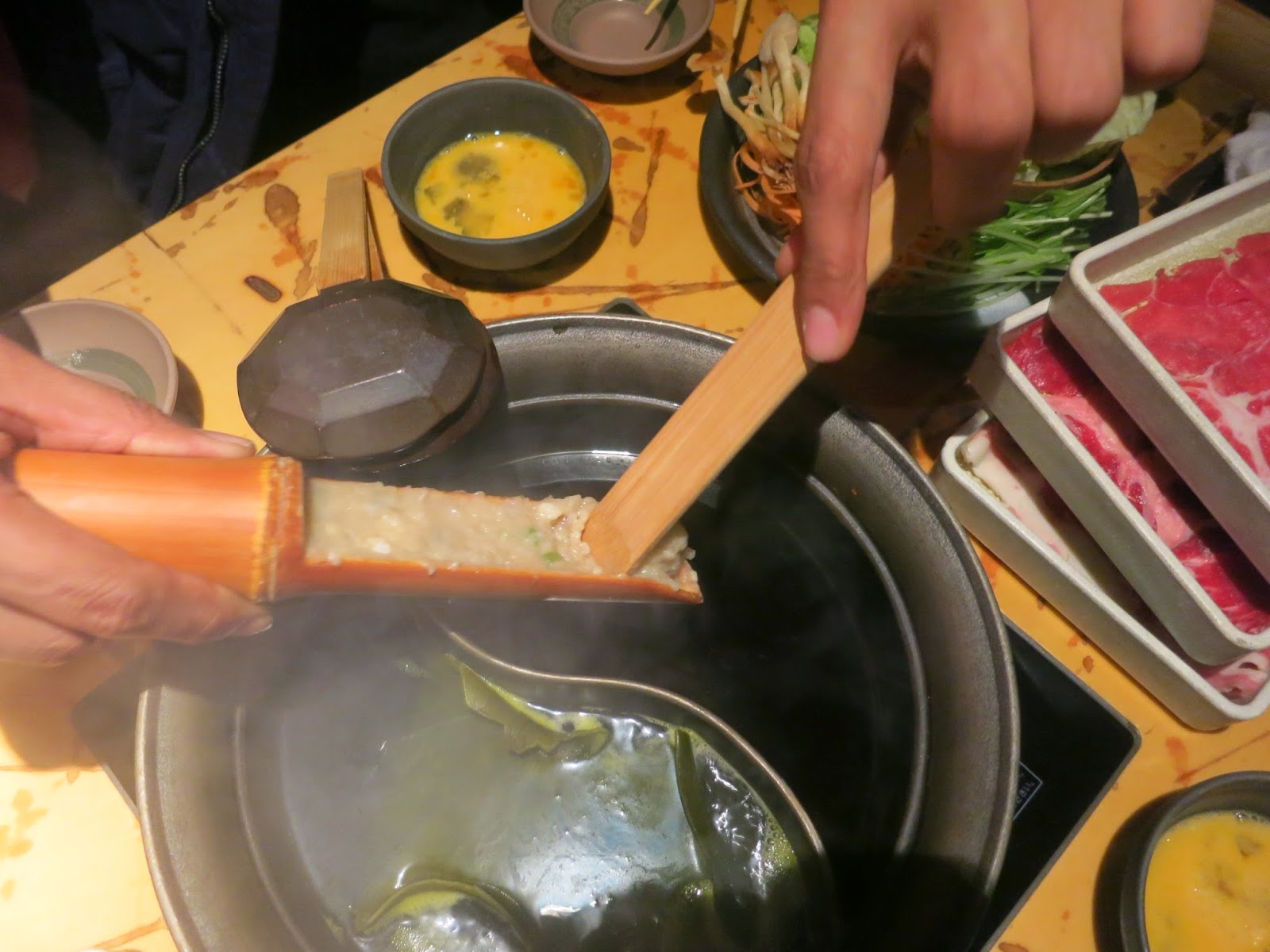 As you can see in the photo above, there's something being scraped off a bamboo tube.  The bamboo tube contains minced fish meat and we're making fish balls out of the meat.

Then we had the usual shabu-shabu ingredients - assorted veggies, thinly-sliced beef ... 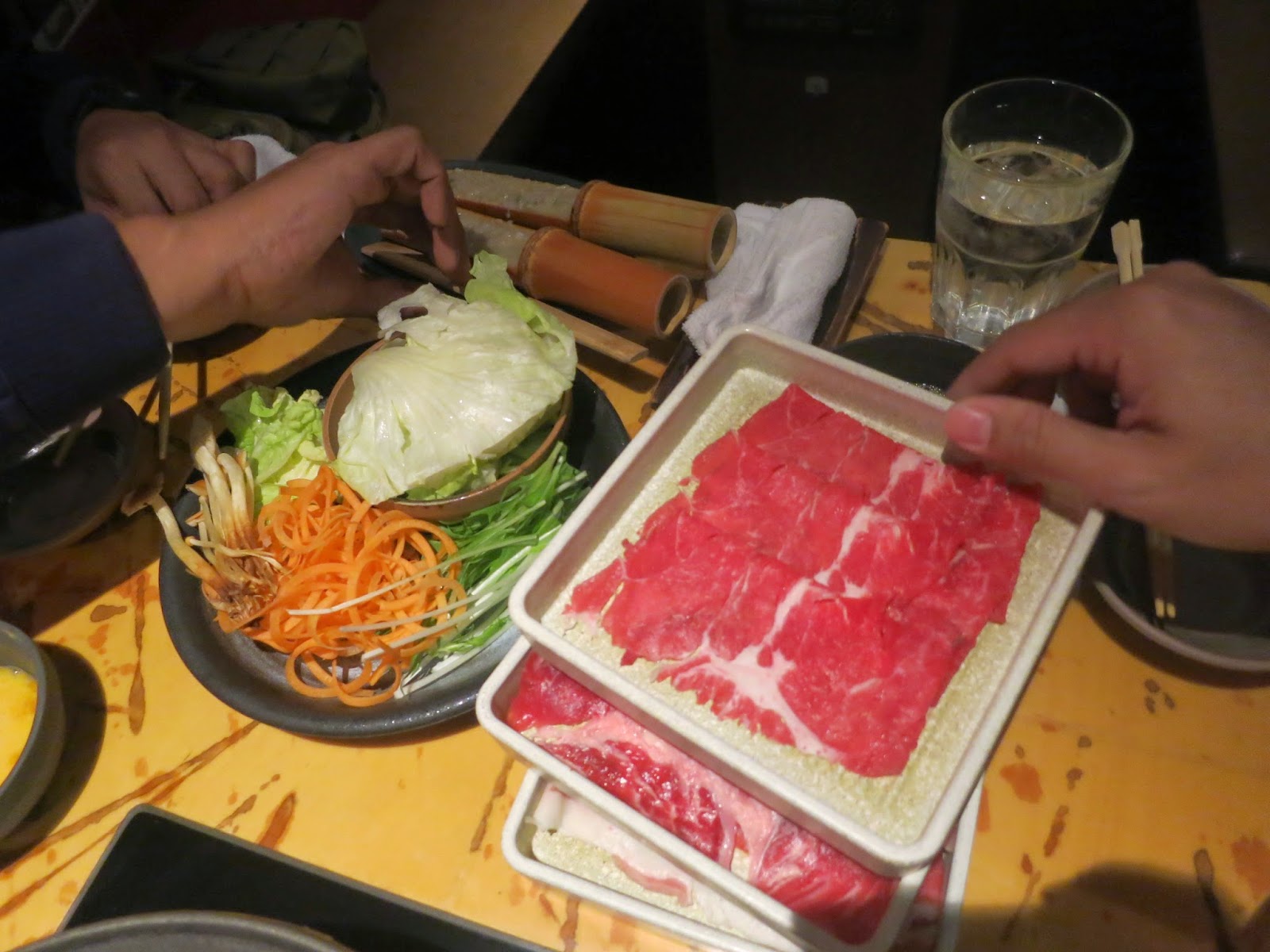 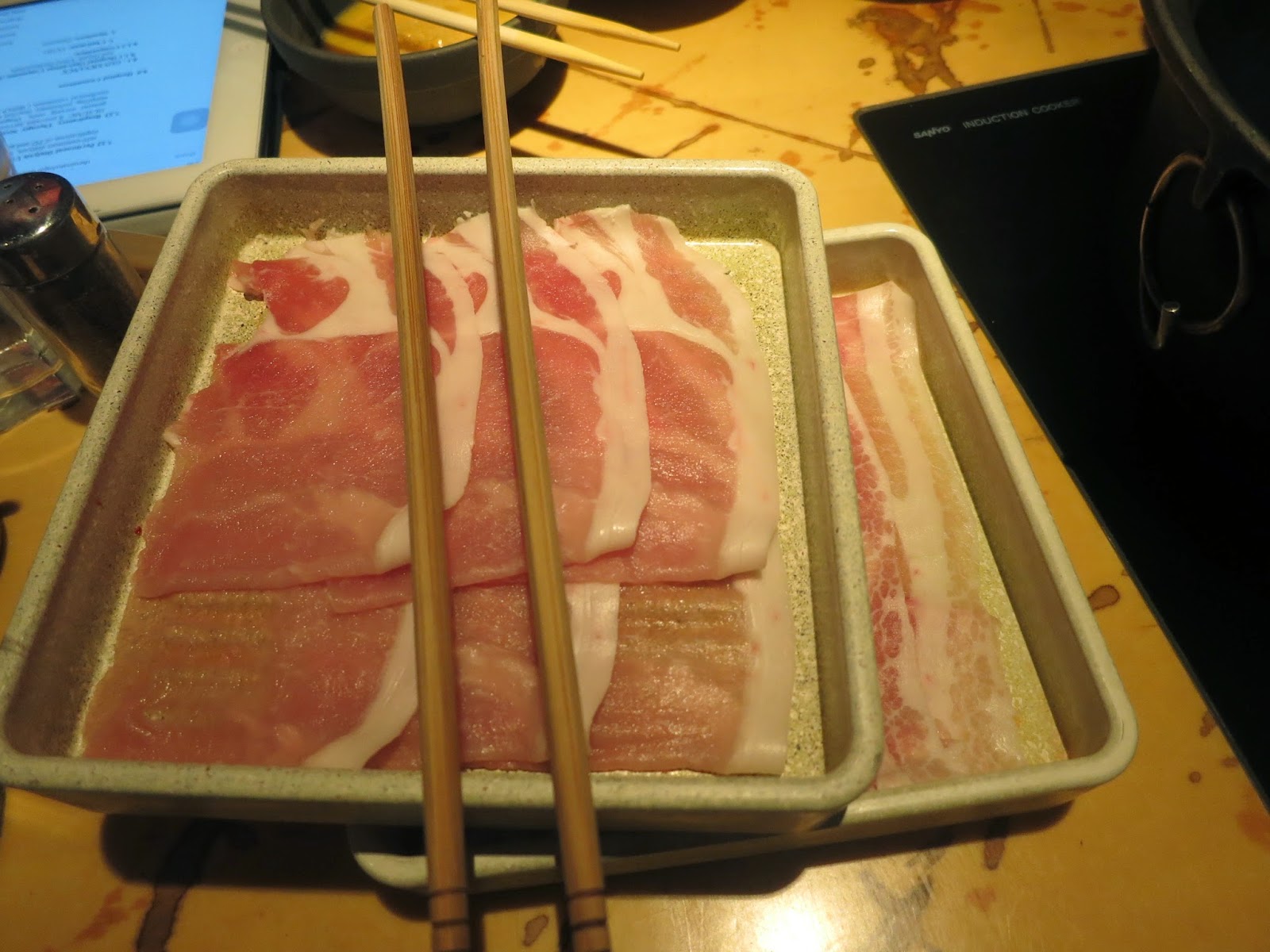 After you cook the meat, you dip it in a bowl of scrambled raw egg and / or sesame oil.  This was the first time I had raw egg in a shabu-shabu. 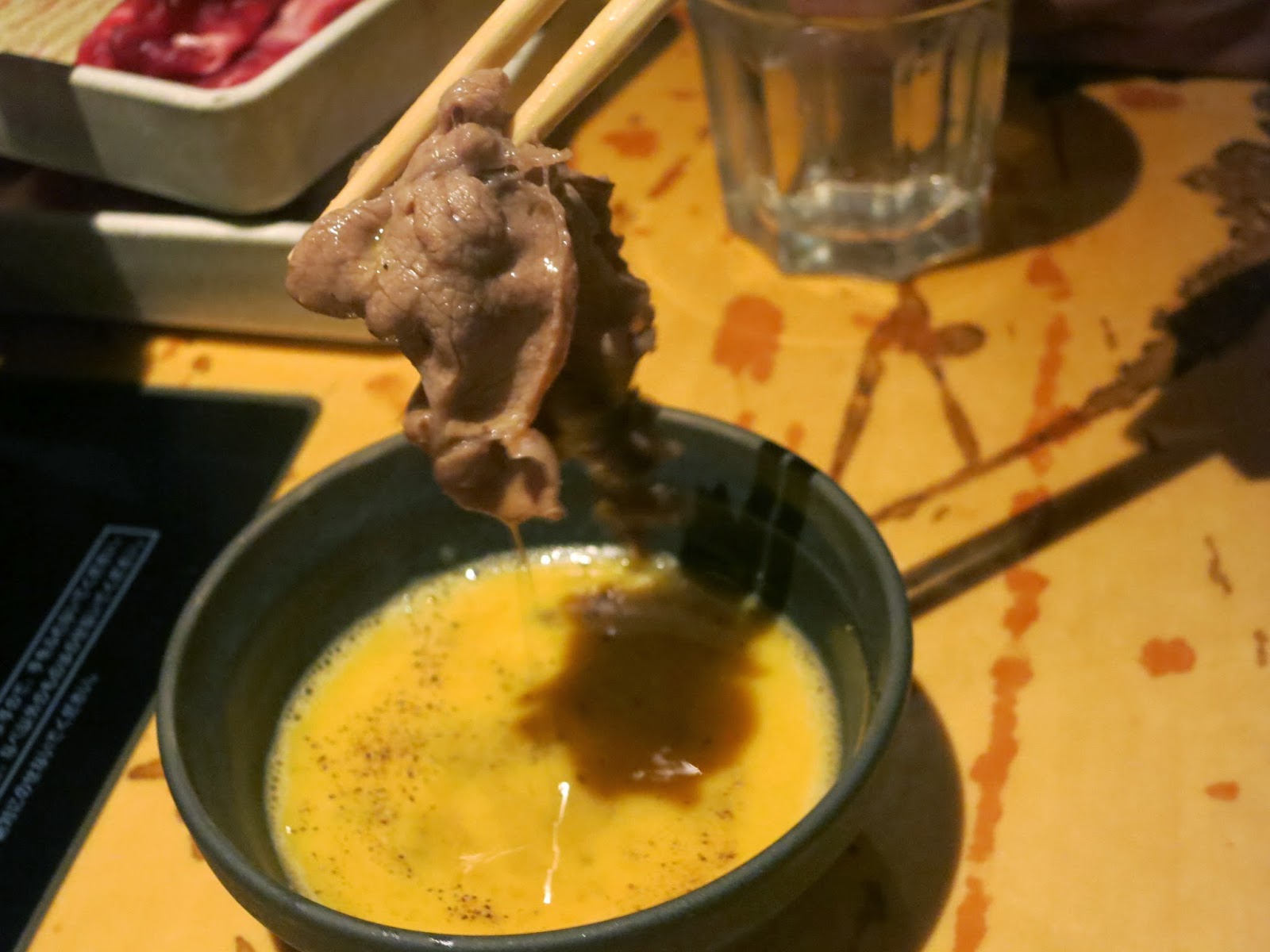 You know how much food we ate that night?  To give you a perspective first, there were 5 of us.

Ok, here goes -  we finished 34 trays of sliced meat (the one in the photo below is just 1 batch! Haha...).   And in addition to that, we had platters of veggies and multiple servings of fish and meat balls! 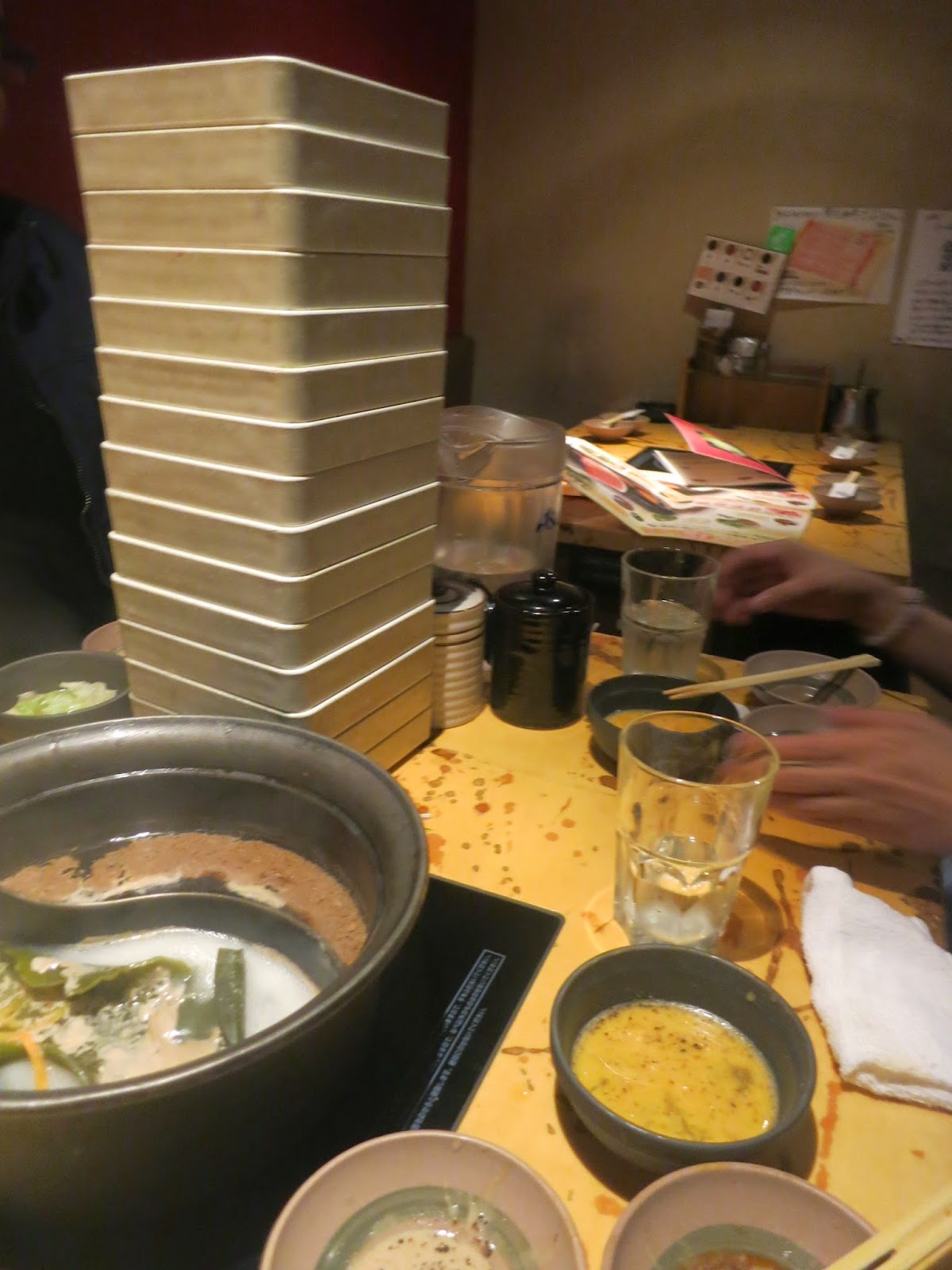 The English professor told us that when we could feel we were 90% full, we had to alert him because for the finale, we'll have rice and noodles with all the leftovers.


The noodles was cooked in one broth. 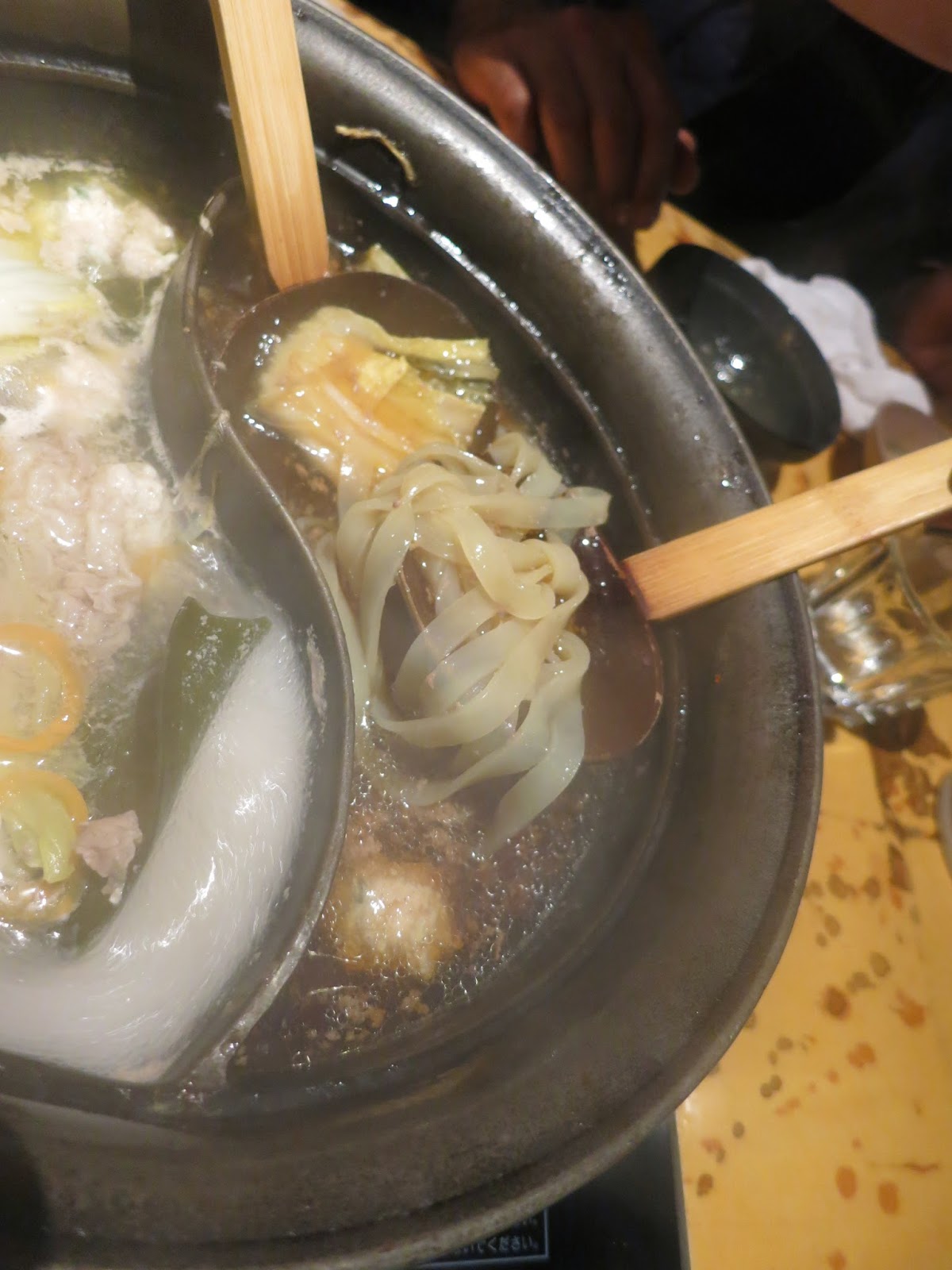 And the rice in the other broth. 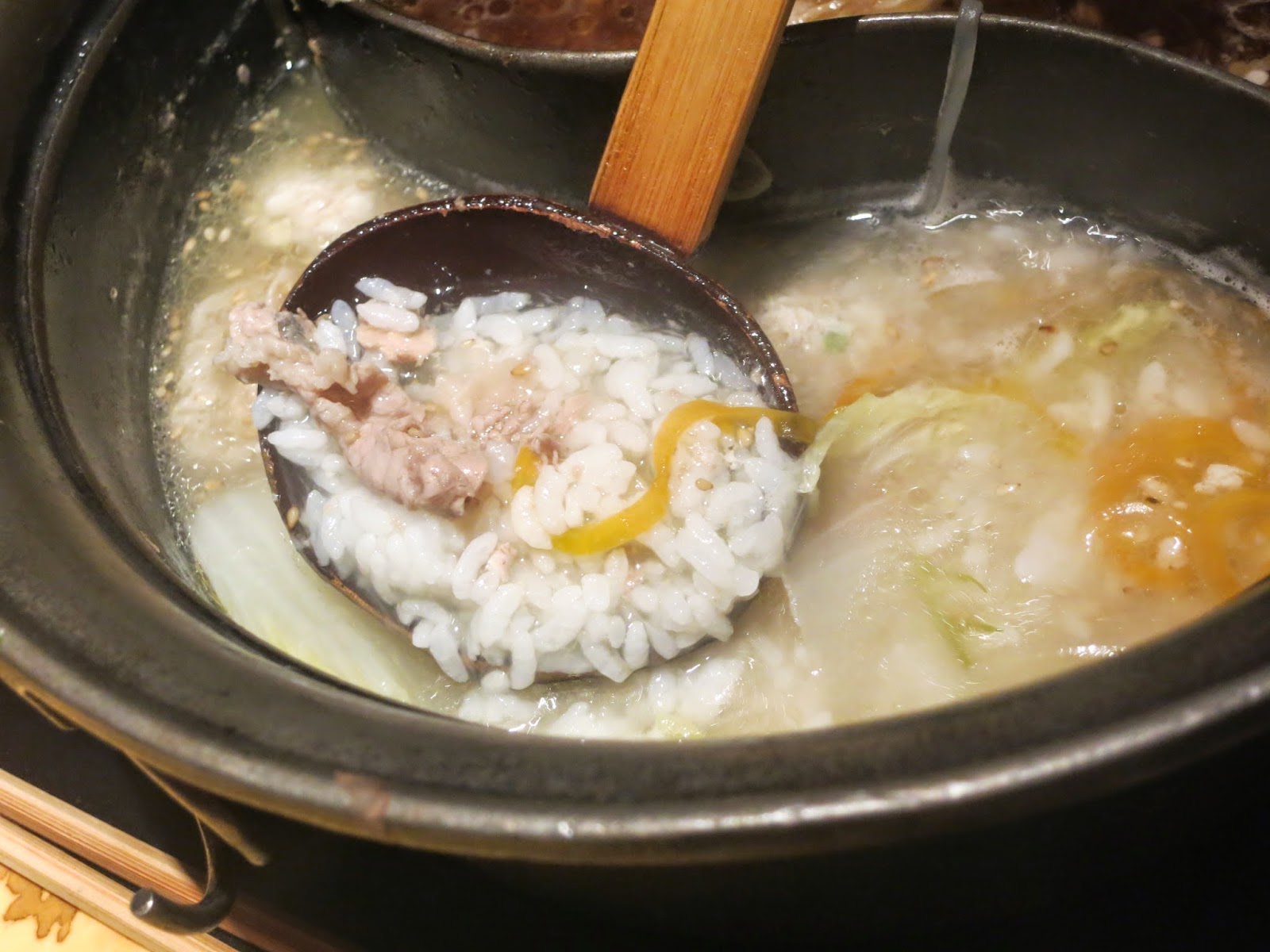 Splash of Yellow
Yellow is the color of energy, clarity and enlightenment. I hope that by reading a post here, you get splashed with some of these in the form of life lessons and fascinating discoveries. But here's a confession - I am not necessarily talented in the things I pursue but I do them anyway because based on my own rules, my own standards, my own definition of enjoyment, and my own criteria of what’s worth my time, they matter. Life is never too short if we live it well. :)

P.S. My posts could be pretty erratic since blogging is the first activity I drop when I don't have any free time and so if the site hasn't been updated for a while, it means that I am doing something else more important or catching up on sleep which is also important. :)